Need a solid cornflour substitute for your recipes? Luckily, there are many ingredients you can swap in for cornflour. Here are the best cornflour alternatives for baking, deep frying, soup, cornbread, biscuits, custard, and every other cooking use you can think of.

If you’ve ever looked at the ingredients list on a food product and spotted cornflour, you know how difficult it can be to find an alternative from the top of your head. Cornflour is used in many recipes from soup to biscuits, but finding a substitute isn’t always easy.

But don’t worry! This article has your back. Here are some of the best substitutes for cornflour that will work well in any recipe that calls for it- baking, deep frying, soup, cornbread, biscuits…you name it!

Cornflour vs Cornstarch vs Cornmeal

Cornflour, cornstarch, and cornmeal are all processed differently and have different flavors. People often get these ingredients confused, which is unfortunate since they are not always interchangeable in cooking.

Cornflour, as explained above, comes from the whole corn kernel. Many describe it as sweet and Earthy in flavor. It is often used in recipes for pastries, waffles, pancakes, and bread.

Cornstarch, on the other hand, is made from finely grinding the starchy portion of corn. The result is a flavorless additive that is commonly used to thicken recipes. Since only the starchy portion is being ground, cornstarch is primarily carbs. Cornstarch has a powdery texture compared to cornflour and cornmeal.

Cornmeal is made from ground dried maize. Its texture can vary more than cornflour and cornstarch, ranging from fine to coarse. Dishes that use cornmeal include cornbread and breaded fried foods like chicken and appetizers. Like cornflour, cornmeal has a strong corn flavor.

Cornstarch is a good cornflour substitute because it is made from the starchy portion of corn. This means that it only contains carbs and no protein, vitamins, minerals, or fiber. This makes it a good option for people who are looking for a gluten-free or low-carb option. Cornstarch also has a powdery texture, which can help thicken sauces and soups.

Rice flour can be a great substitute for cornflour if you need to avoid gluten. It also works well for thickening dishes that are clear since it doesn’t have any color. For example, a broth would benefit from using rice flour if you wanted to thicken it.

Cornmeal is a good cornflour substitute for fried foods because it has a coarse texture. This makes it easy to coat your food with the powdery starchy part of the kernel. It also has a potent, Earthy flavor that will add depth to your recipe. You can use cornmeal in recipes like fried chicken, fried fish, and other foods that benefit from a crunch.

Whole wheat flour works well as a cornflour substitute, but you will need to use twice as much of it as you would use cornflour. Keep in mind that it is not completely flavorless. Another thing to note is that wheat flour contains gluten. If you are sensitive to gluten, avoid this ingredient.

Another option is to use all-purpose flour. Like wheat flour, all-purpose flour has gluten and should be used twice the amount as cornflour. This is one of the most common cornflour alternatives used since it’s a pantry staple for a lot of people.

Need a thickener for your soup or sauce? Arrowroot powder is a flavorful option that can be used instead of cornflour in a 1:1 ratio.

If you don’t mind working fast with your flour, consider potato flour. You will want to quickly whisk it to avoid lumps. Otherwise, it’s a fantastic alternative. Use potato flour in the same amounts you would use cornflour.

Health nuts love using ground flaxseed for good reason. It’s packed with nutrients like omega-3 fatty acids and fiber. The only drawback is that it has a slightly bitter flavor.

Masa Harina is ground from maize (corn), which has been soaked in a lime solution. After the ground corn has soaked, it is rinsed, dried, and ground into a fine powder. A popular food that uses Masa Harina is tortillas.

Cornflour Flavor & What It’s Used For

When tasted raw, cornflour can have a slightly bitter flavor. After being baked, cooked, or grilled, it will take on a sweeter and earthier taste.

Cornflour is a pantry staple for good reason; it has a ton of uses. It is commonly used in baking, frying, and thickening dishes.

If the recipe you are interested in making calls for cornflour but you don’t have any on hand, the substitutes listed above will be very useful for you.

How to Make Cornflour at Home

An easy way to make cornflour at home is by simply drying and grinding white or yellow corn kernels. This may take a little time, but the results are well worth the effort. You can grind it in a food processor, blender, or manually with a mortar and pestle.

If you don’t have enough time to wait for corn kernels to dry, you can opt to use popcorn kernels. With popcorn kernels, you can go straight to grinding them in a blender or processor. Store your fresh cornflour in the fridge or freezer to extend its life.

There are a few different ways to thicken sauces and soups without using cornflour. One option is to use a roux. A roux is a combination of fat and flour that is cooked until it’s thick and bubbly. This mixture can then be added to your sauce or soup to thicken it up.

Another way to thicken without cornflour is by using pureed vegetables. If you have a blender or food processor, simply blend up some vegetables and add them to your sauce or soup. This will give your dish more body and thickness.

The simplest options are to use one of the cornflour substitutes listed above. Starches like potato starch, arrowroot starch, and tapioca starch are all great thickeners. In addition to these options, you can use guar gum and sorghum flour.

Can I use plain flour instead of cornflour?

Yes, and it is often used as a cornflour alternative. Fried foods, soups, and baked foods all can be made using plain flour.

Is Masa Harina the same as cornflour?

No, although both are made from finely ground corn, Masa Harina has a distinct flavor due to the lime treatment it undergoes.

Is maize flour the same as cornflour?

Yes, maize flour is simply another name for cornflour.

Cornflour is a pantry staple for good reason; it has a ton of uses. It is commonly used in baking, frying, and thickening dishes.

If the recipe you are interested in making calls for cornflour but you don’t have any on hand, there are some useful substitutes listed above that will work nicely as replacement options.

Do you have some favorite cornflour substitutes? Let us all know in the comments section. As always, thanks for reading. 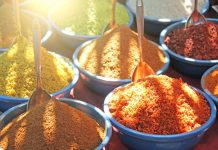 AMAZON AFFILIATE DISCLAIMER
The owner of this website is a participant in the Amazon Services LLC Associates Program, an affiliate advertising program designed to provide a means for sites to earn advertising fees by advertising and linking to Amazon properties.
Contact us: april[at]diybunker.com
© 2023 Durian Digital LLC. All Rights Reserved.