Ceilings are an important part of the design of a room. They provide a focal point and can make or break the ambiance. Ceiling textures come in many different forms and can create anything from a rustic look to modern elegance. In this blog post, we will go over 12 ceiling textures that you should know about for your home!

If there is damage or other problems with existing ceiling textured ceilings such as popcorn ceiling or orange peel ceiling: it’s time for an update! There are many types of new & improved ceiling textures you can try.

What is a ceiling texture?

A ceiling texture is a surface design that can be applied to the ceiling of your home. There are many different types, which allow you to create anything from an elegant look to a rustic feel in any room of your house.

Why You Should Try a DIY Ceiling Texture

You can easily DIY ceiling texture, which will save you money. There are many different tutorials online with instructions on how to make your own ceiling texture. I will cover the most popular ceiling textures and some basic information about them.

Best Ceiling Textures for Your Home

A skip trowel ceiling is a drywall texture that has an uneven, bumpy surface. This type of ceiling was originally used in the 1950s as it provided good sound absorption and easy installation with just one coat of joint compound. Skip trowel ceilings may have to be patched where water damage occurs or plaster falls off, leaving holes in the ceiling.

Tools and Materials Needed for a skip trowel ceiling:

Pros of the skip trowel ceiling:

The pros of this ceiling texture are that it absorbs sound well and is easy to install.

Cons of a skip trowel ceiling:

A major con for this type of ceiling texture is that it’s difficult to repair when water damage occurs, or plaster falls off, leaving holes in the ceiling. It also makes hanging lights difficult.

An orange peel ceiling has a high gloss finish and many deep, horizontal grooves that resemble the peeling skin of an orange fruit. This type of texture creates interesting shadows on the walls below it as light reflects off its surface. You can create this pattern by using three or more colors of ceiling paint.

Pros of an orange peel ceiling:

– It’s a great way to add detail and dimension to ordinary ceilings.

What are the downsides of an orange peel ceiling?

– It can be time-consuming and difficult to create the grooves.

Cost of an orange peel ceiling:

– The cost is based on how much paint you use, but it will depend on your location as well. You could pay anywhere from $40-$200 depending on where you live in North America.

A Brocade knockdown texture has an intricate pattern that consists of multiple layers in white, cream-beige, and brown colors. This type of ceiling was popular during the 1980s but has seen a resurgence recently due to its unique appearance and durability against scratches.

– Two hawks, joint compound, knockdown tool, and a container for the mix.

Tips on how to apply a Knockdown Texture:

– Use an all in one plastering trowel

Pros of a brocade knockdown ceiling:

– Creates a unique appearance in any room of the house.

Cons of a brocade knockdown ceiling:

– Difficult to clean. Dust and dirt settle into the cracks of this ceiling texture, making it more difficult for a vacuum cleaner to remove.

– Risk of mold growth if moisture is present in the room due to how porous this ceiling can be. In addition, because there are many crevices that dust can settle into the ceiling.

Looking to spruce up your walls alongside your ceiling? Check out these wall color combinations that’ll instantly change your home’s look.

A swirl ceiling texture is a textured ceiling that mimics the swirling movement of liquid. This type of ceiling design has been popular for its calming effect on those who suffer from health issues such as headaches, claustrophobia, or vertigo.

It consists of an elaborate pattern with individual pieces cut out to create the swirls or waves and then covered in overlapping rows of perfect circles. The depth created by this type of ceiling can make any space seem much larger than it actually is. This style was trendy during the 1950s, but it has seen a resurgence in recent years.

Alternative names for a swirl ceiling:

An easy way to create a swirl ceiling:

– Cover the drywall with paper patterns and attach them using tacks or small nails. You can then remove the paper once you’ve finished painting. Apply the paint in thin, even layers from top to bottom until there is no more visible paper.

– Use a wide roller and paint in long, even strokes to create the desired effect.

Pros of a swirl ceiling:

– Most ceilings with this type of look are painted, which means prep work is required before painting. It also requires more time to paint since the ceiling must be painted from top to bottom for an even appearance.

A stomp knockdown ceiling texture is characterized by its large textured pattern that looks like waves or cascading water flowing down from above. This design was prevalent for ceilings in the 1980s and the 1990s but has seen a resurgence in recent years.

Pros of a stomp knockdown ceiling:

Cons of a stomp knockdown ceiling:

– The texture can be tricky to install. Stomping the trowel or broom over the ceiling in one direction may not create uniform waves and even in all directions. Wetting the surface with water beforehand will allow for more creative designs

The lace ceiling texture is characterized by its intricate patterns that resemble a delicate fabric. This design was trendy during the Victorian era, and it has seen a resurgence in popularity recently due to an increased interest in period pieces for homes.

Alternative names for a lace ceiling:

Tools to make a lace ceiling:

Pros of a lace ceiling:

– The lace ceiling has a delicate touch to it that is pleasing for many homeowners.

Cons of the lace ceiling:

– The lace ceiling is considered a complicated design to create and may not be suitable for DIYers.

How much does it cost? The ceiling price will depend on how elaborate you want your design to be, but if you are making this project yourself, then expect it to have an average budget range of $500.

– Home Depot offers a lace ceiling kit for around $300, and there are many other options available to those who want something more complicated as well.

A comb ceiling texture can be recognized by the tiny, closely-knit ridges that resemble teeth on a comb. It is often found in rooms with high ceilings or an open floor plan where the ceiling can be more fully seen and appreciated by its occupants.

Alternative names for a combed ceiling:

A popcorn ceiling has a textured look. It is made of small bits of gypsum plaster or asbestos that, when sprayed with water, expand into puffs and then harden. This type of ceiling texture can be found in homes from the 1920s to the 1950s.

This older style has now become popular again in certain designs. It gives off more light than other styles which can help create a warmer environment.

A smooth ceiling texture has little to no discernible pattern at all due to its plain surface. It is created by applying a very light layer of joint compound that is then washed with a trowel to create an even texture. This type of ceiling is often found in rooms without any other decoration and where simplicity is desired, such as bedrooms or bathrooms.

Alternative names for a smooth ceiling:

Tools needed for a smooth ceiling:

Pros of a smooth ceiling:

A smooth texture can reduce glare and make the room feel bigger, especially in smaller rooms such as bathrooms. It also has an “unfinished” look that creates the feeling of open space due to its higher ceilings than

The spray sand texture is created by spraying a joint compound on the ceiling and then using a trowel to create its pattern. The key features of this type of ceiling are that it has swirls, dips, waves, or other non-constant patterns on its surface.

The spray sand is in between the smooth and knockdown ceilings. The best option for a DIYer who doesn’t want to spend too much time on their project but also wants something that looks well done.

A downside of this type of install is that it is not as durable as the other textures.

What is the difference between the French lace ceiling and Brocade Knockdown Texture?

The terms “French lace” and “Brocade knockdown texture” are often used interchangeably because both styles feature an intricate pattern of small pieces that look like delicate lacy fabric cascading. However, there is a difference between the two. French lace ceiling is characterized by several small pieces that are very close together, while Brocade knockdown texture has larger gaps between each pattern piece, giving it more depth and dimension.

What is the most affordable ceiling texture?

Several ceiling textures can be considered affordable. The most popular inexpensive texture is the knockdown ceiling, which has been used since the 20th century. It’s also very durable and resistant to mold or mildew growth, so that it will last for years with proper maintenance. Spray sand ceiling is another low-cost option that has been around for a long time and has recently become popular again.

Which ceiling texture is the most durable?

Many ceiling textures have been proven to last for decades. For example, the knockdown texture has withstood the test of time and is very resilient when it comes to water damage. It can be applied by hand or sprayed on, which means there’s no need for heavy machinery like sanding equipment. Another durable ceiling texture is the brush ceiling, made from a combination of limestone or marble powder and various binding agents.

What is the oldest ceiling texture?

The oldest ceiling texture is the comb, which dates back to ancient Egyptian civilization. It used carved wood and animal skins that were stretched across a framework of beams or rafters.

Which Ceiling Texture to Use

This is difficult because it depends on many factors like the room’s size and design. However, for many people looking for an unobtrusive ceiling that can blend into any decorating style or color palette, a smooth texture may be more appropriate.

The most water-resistant ceiling texture is the spray sand, which lasts about 40 years without special care. The least durable ceiling texture for humid climates is the orange peel, but it can easily be updated with a fresh coat of paint.

The most traditional ceiling texture is the Brocade Knockdown Texture, which replicates a style of embossed ornamental plasterwork often found on ceilings in palatial and high-end homes.

The easiest ceiling texture to install is smooth. It’s also the least expensive, but it can’t be painted or updated and must be installed over drywall.

The most popular ceiling texture in Europe is the Brocade Knockdown Texture, which replicates a style of embossed ornamental plasterwork often found on ceilings in palatial and high-end homes.

The most popular ceiling texture in the United States is the Hawk and Trowel Drywall Texture, which replicates a style of gypsum plaster found on ceilings in homes built from the 1930s to 1970s. 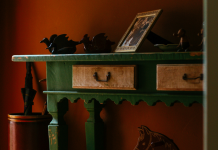 15 Beautiful Colors That Go With Burgundy 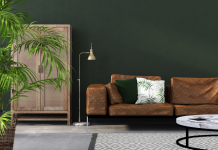