Nothing is better than a quick mug made treat to satisfy your sweet tooth.  You will love indulging in this convenient vegan recipes.  Below are eight of my absolute favorite vegan mug recipes to curb my cravings.  For more tasty vegan food, try these soup recipes.

8 Must Do Vegan Mug Recipes 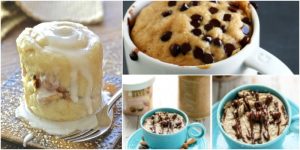 One Minute Cinnamon Roll in a Mug

Sometimes when you have a sweet craving, perhaps after dinner, you just want it now. This mug dessert only takes a minute to make so you’re in for some instant gratification!

S’mores has always been a sweet treat favorite for me. This mug cake reminds me of my childhood when I would roast marshmallows outside in my grandfather’s garden.

This one is great because it has options-vegan or non-vegan. If you are looking for the vegan version then just swap out the egg for a flax egg. Problem solved!

I love dedicating my mornings to creating a nice moka pot coffee, but not so much to making the actual breakfast. This French toast recipe is great, because it can be made in under 5 minutes and can be taken on the go.

This coconut flour vanilla mug cake is just too cute! It looks like a funfetti cake and I am totally diggin’ it! Just replace the egg with a flax egg to make it vegan. : )

Recipes that only require a microwave are the best, and to make it even better, it still tastes like it just came out of the oven. Personally, I adore the scent of lemon poppy seed ANYTHING, so this one is a win.

Being low-carb, this one is definitely a great option to stick to your healthy lifestyle. You are able to have a sweet treat while working towards those goals! In order to make a vegan version, just omit the egg and slowly add your milk of choice.

While I am not the biggest fan of almond joy, I know a lot of you out there are. Let me know what you think of this one! : )